The Kenilworth Racecourse Conservation Area (KRCA) is located within the Cape Floristic Region, an area of global biodiversity significance. The conservation area protects Cape Flats Sand Fynbos, a critically endangered vegetation type endemic to the City of Cape Town. Cape Flats Sand Fynbos is highly transformed, with less than 2% formally conserved. It is vital that such valuable pieces of natural areas within urban environments be preserved as they offer priceless services. To protect such rare and threatened species, KRCA has a nursery on site, where plants are propagated and nurtured.

We propagate plant species that are mainly of conservation concern, meaning species that are in danger of extinction. Species are selected for propagation on the basis that they are actively growing and are not bearing flowers. The flowering calendar guides the team on which species to target when collecting plant cuttings. KRCA has been identified as one of the best examples of current Cape Flats Sand Fynbos, and plants propagated in the nursery are taken from the conservation area only. Examples of endangered plant species that can be found in the nursery include but are not limited to; Leucadendron levisanus, Diastella proteoides, Erica turgida, Erica verticillata, Lampranthus reptans, Erica margaritacea, Cliffortia ericifolia, and Serruria glomerata. We try by all means not to introduce plants in the conservation area that were collected from other regions to avoid genetic contamination.

Tania Snyders currently manages the nursery and irrigates the plants in the morning and afternoon; she propagates from plants collected in the conservation area. During plant cutting collection/harvesting, information that is collected includes the management block (area), the date and time, the gender (if the plant is dioecious like the L. levisanus), and the name of the person collecting. This information is then used when labelling the propagation trays used to grow the cuttings. Plant cuttings are collected from actively growing plants, and nothing more than 10% is collected on an individual plant. Rooting hormone powder is used on the cuttings to encourage the formation of roots, which are then placed on propagation trays. Depending on the plant, it could take between 2 to 6 weeks for the roots to grow. When the cuttings have rooted, they are first transplanted (potted) to small pots and later to bigger pots. These plants are used during restoration initiatives.

The aim of restoration is to reinstate the Cape Flats Sand Fynbos vegetation structure to near-natural and improve the ecosystem functioning. This will enhance the conservation integrity of the KRCA and ensure the protection and conservation of Cape Flats Sand Fynbos in perpetuity. KRCA uses both active and passive restoration. Active restoration is through alien clearing and planting of indigenous plant species. Some sections of the conservation area are slightly degraded, especially the peripherals, which require active restoration. The plants that are grown in the nursery are used for such rehabilitation campaigns. Growing plants in the nursery require certain specialised tools and infrastructure, and currently, we try to make the best out of the current resources that are available.

We plan to upgrade the greenhouse tunnel in the next few months, as the heating beds, the mist sprayers, the irrigation system, the extractor fan, and the structure of the greenhouse tunnel all need to be replaced with new ones. We are also hoping that when the nursery is operating at its full potential, and we have enough plants, we will start to sell plants to neighbouring communities with the aim to encourage people to plant indigenous plants in their gardens. This will, in turn, help to bring this highly transformed vegetation type back to its former glory. 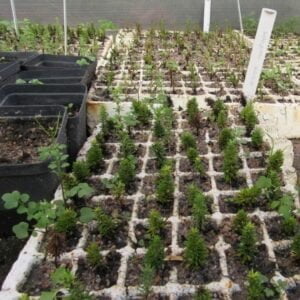 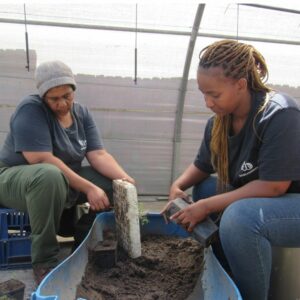 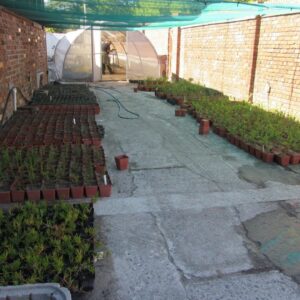