The Zoarvlei section of the Table Bay Nature Reserve is situated between Paarden Eiland Industrial Centre and the suburbs of Rugby and Brooklyn. This wetland reserve is 40 ha in size, with 87 species of plants occurring on site. North of Zoarvlei, about 7km away, and nestled in the heart of the Milnerton Racecourse, is a remnant patch spanning 19ha of Cape Flats Sand Fynbos, containing 333 plant species, 34 of which are Red Data species (threatened species).

According to Reward Nzuza, Site Manager of the Zoarvlei section, “Illegal dumping in the area is an ongoing challenge for the team at Zoarvlei, who have been conducting continuous clean ups.”

“To increase water flow, improve the habitat for aquatic life, and the rehabilitation of the Zoarvlei canal at large, the canal had been excavated to remove the reeds and sediment deposition over the years. The project has been a success and has seen positive results as the birdlife slowly started to re-establish in this section of the reserve, recent spottings being: grey heron, cattle egret, Egyptian goose, yellow-billed duck, Cape teal, Cape shoveler, purple swamphen, common moorhen, red-knobbed coot, blacksmith lapwing, water thick-knee, kelp gull and the Hartlaub’s gull”, says Nzuza.

Aside from the 110 bird species that have been recorded at Milnerton Racecourse Conservation Area of Table Bay Nature Reserve other fauna such as Cape dwarf chameleons, Cape dune mole rats, mole snakes and grysbok are regularly seen, as well as a number of butterfly species at this time of year. Furthermore, with the filling of the seasonal wetlands, a number of bird and amphibian species which use the seasonal wetlands as breeding grounds, feeding grounds and nursery grounds are being seen. 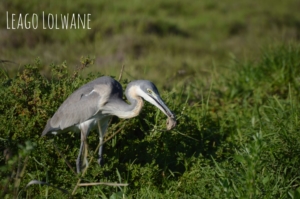 Ntombi Lolwane, Site Manager at the Milnerton Racecourse section, tells us domestic animals continue to be a problem, “House cats are spotted hunting birds and other wildlife in the reserve. Dogs are not allowed in the Northern Section of the reserve. We appeal to the public to remember to be mindful of the rules and regulations on nature reserves. Conservation measures are intended to protect wildlife populations from atypical disturbance. When the public respects and heeds the signage, they respect the inhabitants of the nature reserve. They are allowing for nature to prosper”.

Management of the Zoarvlei Section is achieved through a three way partnership between CTEET, City of Cape Town Biodiversity Management Branch and the Paarden Eiland City Improvement District.

Management of the Milnerton Racecourse section is achieved through a three way partnership between CTEET, City of Cape Town Biodiversity Management Branch and the Royal Ascot Master Property Owners Association.

Nature Connect subscribes to the Independent Code of Governance