The Cape porcupine (Hystrix africaeaustralis) is a well-adapted mammal to the urban environment.

It is a resident in many of the Muizenberg East Conservation Cluster sites. Around 8:30 on Wednesday, 29 June, the site manager received a call from the Soralia Village trustees to request assistance with a porcupine that found itself outside of the conservation area fence and appeared to be struggling to find a safe way in. To make it worse, passers-by had been spotted by Soralia’s
security team to be throwing stones at the porcupine and causing it distress.

The Muizenberg team called in the assistance of the SPCA wildlife unit, who arrived on the scene within an hour with the
correct tools to manoeuvre the porcupine safely into an appropriate cage. The inspectors whisked the juvenile porcupine off to the SPCA vet at the Grassy Park Clinic for a check-up to ensure the stone-throwers had not done any damage. The vet gave the all-clear, and SPCA Inspector Trevor contacted the Soralia Conservation site manager, Kim, to arrange for its immediate release
back into the fenced wetland area. This couldn’t have come as better news to the residents of Soralia Village, who had been following the porcupine’s story all morning on their complex WhatsApp group.

Many were concerned that one of their local prickly residents would be relocated to another reserve. Still, the conservation team and trustees that stayed in constant contact with the SPCA Inspector ensured this did not happen. By 10:30 the same morning, the young roaming porcupine was safely released back into the conservation area. It took a little nudge or two to get it out of the cage, but then it ran off back into the bush to continue foraging in peace.

The wildlife corridors in urban spaces offer sanctuary to many creatures, and a story such as this
illustrates the importance of conserving these green spaces that provide refuge for small mammals
and other living beings trying to navigate the urban sprawl around them. 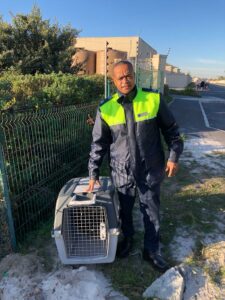 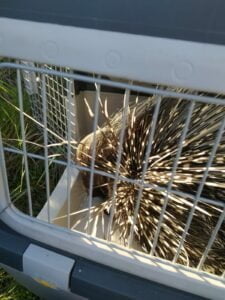 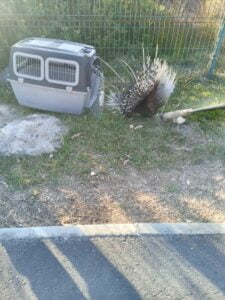 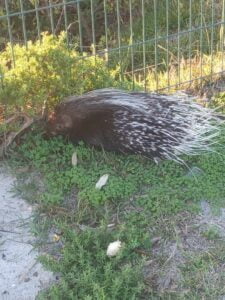